All you want to know about the cashew nuts tree? 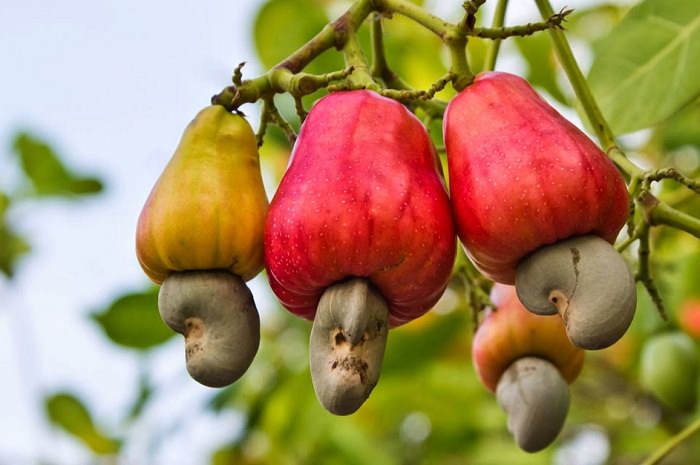 Cashews are local to northeastern Brazil. Portuguese travelers took it to East Africa and India during late 16th century. You can see the cashew trees beside the coastlines in these areas.

The cashew trees wood is used to make packing cases, handicrafts, and charcoal. The gum inside the shells of cashew is used as a bug spray. Further, it can be used for making plastic.

The cashew shells are also used as traditional medication. The cashew apple is used locally to prepare refreshments and jams. Cashew apple seeds (Cashews) are a good source of healthy nutrients.

Cashew is an evergreen tree. Cashew trees are grown for their nuts, wood, and apple. Thin leaves of the tree are in an oval shape, and sparkly dull green color. The leaves are smooth with visible veins and hang on branches with petioles.

The cashew nut tree produces pinkish-white flowers on hanging panicles. These flowers turn into a kidney-shaped organic product (nut). The size of nut is around 3 cm long with a dark brown color shell on the base of cashew apples.

The cashew apples are in pear shape with red and yellow colors. Cashew nut trees grow taller. They can grow up to 12 meters of height and the life of a tree is around 25 years. Growing cashew nut tree is simple like weeds.

A cashew nut tree will begin delivering nuts in its second year. It won’t achieve its full capacity until the point when it is around 10 years of age.

The production life cycle of cashew tree is 20 years. A cashew nut tree can produce up to 50 kg of nuts in an year.

Cashew apples are in different colors like red, yellow, or yellowish-green. They are found in different shapes like round and pear. These are juicy and sweet, and contain an appealing smell and taste.

Cashew apples are not actually apples they are the swollen stem of the plant.

Cashew apple looks attractive with red and yellow color. It contains many vitamins and nutrients. The juicy cashew apples are delicious and full of energy. The outer parts of cashew apple and cashew are acidic.

If you bite an unwashed cashew apple, it leaves a textured feeling in your mouth.  Always use cashew apple after proper washing. We can use the cashew apples for making juices or can eat them with yogurt or can make jam.

You can easily found the cashew on the base of cashew apple in a kidney-shaped dark brown shell. The actual cashew nut is present in the shell. The outer shell is not consumable and contains toxic fluids. So be cautious when trying to open the cashew nutshells.

Where can you grow cashew nut trees?

You can plant cashew nut trees in the wet and dry tropics. The basic producers of cashew nuts are Brazil, India, Vietnam, Africa, Tanzania, Mozambique, and South East Asia.

The soil temperatures for planting cashews must be 10°C. Cashew nut trees handle temperatures above 40°C, but outer temperature of 25°C is perfect.

You can grow them in normal soils, but the best soils for planting cashews are sandy soils.

How to plant cashew nuts?

In some areas, plant nurseries stock the seed or small plants for cultivators. You can also buy from them, they have 100% authentic plants.

If you need to grow your cashew nut trees from seeds, you can plant them in pots or put them straight in the soil. Keep them damp, and they should start growing within four to five days.

Cashew nut plants don’t need wet or overwhelming earth soils. A place which can guard the plants from heavy breeze is ideal. Developed plants need around 10 meters gap between them. The average height of a developed plant is 12 meters.

Cashew nut trees grow in sandy soils. Yet, sandy soils don’t hold much water and are commonly not extremely ripe. You have to supply your cashew nut plants with extra water and compost.

In dry season your plants need more water. Your plants don’t need a lot of fertilization. You need simple fertilizer which contains nitrogen, phosphorus, and zinc.

How to reap cashew nuts?

Cashew apples appear in winters. You have three months’ time to pick these apples. How to figure out they are ready to pluck? The pleasant pink, red, and yellow colored cashew apples are sign of a reaped tree. You can additionally found the dark brown shelled nut on the base of cashew apples.

The cashews are safe in their nutshell. You don’t need to process the whole stock, you can store them without processing. Store them in a cool and dry place.

How to process and open the cashew nuts?

You can’t remove shell of cashews like other nuts. Their shell contains acidic fluid that will be harmful to you. The fluid may cause skin irritation if touched. So, it requires some special technique to open the cashew nuts. The experts open the shell without getting the fluids on their skin.

1) The basic technique is to break the shells and separate the nuts before it defrosts. For this technique, you need gloves, long garments, and glasses. The separated cashews can be eaten raw, before eating ensure they are not containing any fluid.

2) The other technique is the simmering technique. For that, you need oil, long gloves, and a full-body suit. Warm the oil to 210°C and after that drip the nuts into it for two minutes.

Never drip them for more than two minutes, if you do that they turn out to be excessively weak. Be watchful when dipping the nuts, because they can bounce out from oil. After two minutes dripping, put these nuts in water and let them cool. After they cool down remove the shell and let them dry.

3) Bake the nuts for minutes in an open container with holes so the harsh fluid can discharge. When the nuts burst into flames soaks them in water. After the baking, you need to put them into sawdust or something permeable to expel the rest of the burning fluid.

Cashew nuts are normally eaten as a snack or as an ingredient in cooking and baking. Apple of cashew are also delicious and can be eaten raw or cooked with different dishes. Local people use the cashew apple to make juice, jam, and vinegar.

What are the usages of different parts of cashew nut trees?

The shells are of cashew are not waste material. The extracted oil of shell is utilized as;

All parts of the tree have some usages. The wood, which is delicate is useful for making furniture. The tree bark is helpful in tanning cowhide.

Indeed, even the stems by which the natural product are connected to the trees are utilized. They provide cashew gum, which is utilized as a substitute for gum Arabic and pharmaceutical products.

In Indonesia, the leaves are utilized as a people’s prescription treatment for skin ailments and consumes.

Modern uses have even been found for the acidic oil, called Cashew nutshell fluid, for example, in;

What are the common diseases a cashew nut tree can face?

The regular diseases of cashew nut tree are;

The normal bugs and creepy crawlies who influence the plants are;

Cashew apples attract wild birds and bats. Most of the time bats destroy the cashew apples.